As it closed the largest comprehensive fundraising campaign in school history, George Washington University needed a way to thank more than 66,000 donors who contributed a total of $1.02 billion during the six years of the Making History campaign. The university determined it wanted to develop a reverse honor roll – focusing on the beneficiaries and outcomes of philanthropy instead of a list of donors and gift amounts – and chose eCity Interactive as its partner in building the site. The final product is the George Washington University ‘Making History’ Microsite, a fully responsive website that gives a voice to the students, faculty members, and program directors that were helped as a result of this historic campaign.

On The Decision to Go Digital

“The first $1 billion campaign in the history of the university is quite an accomplishment,” says Jennifer Riordan, Executive Director of Donor Relations at George Washington University’s Division of Development & Alumni Relations. “We wanted to recognize the donors who have made such a difference to the university, but also the difference that their gifts made on people’s lives. Because it’s a gift, but it’s also an investment in the university and GW culture.”

“We decided to move forward with a microsite because we wanted to have relevant content, in a variety of styles, that people could consume and share. We wanted it to be focused on storytelling and drawing people in.” – Matt Lindsay

After considering a print publication, GW decided that a campaign microsite would be the more flexible and dynamic way to communicate the impact of these gifts in people’s lives. “A digital environment provides more options in terms of storytelling than print does,” says Matt Lindsay, Executive Director of Digital Strategy & Engagement at GW’s Division of Development & Alumni Relations. “We decided to move forward with a microsite because we wanted to have relevant content, in a variety of styles, that people could consume and share. We wanted it to be focused on storytelling and drawing people in.”

Goals for the Site

With an accelerated timeline due to the close of the Campaign and a presidential transition, eCity worked with George Washington University to create a site that would serve as a digital impact report for GW’s Making History campaign. “It’s important for those who have contributed to see the impact of their gift, but also see that there are many people like them who decided GW was worthy of investment,” says Riordan.

One of the major goals for the site was for alumni and donors to see the transformational impact philanthropy has on individual Colonials and the university at large, and hopefully feel inspired to give again in the future.

For current students, faculty, and parents, the purpose of the site is to demonstrate the impact of philanthropy on the GW experience. Strategic campaign priorities included increasing affordability for students, enhancing the research footprint of the university, and providing additional resources for faculty and students.

For the internal GW staff audience, the site commemorates the efforts of GW employees and provides a historical document that can be referenced in preparation of future campaigns. “It’s really important to show that there is value in this type of campaign, and that a lot has been accomplished because of this philanthropy,” says Lindsay. “This type of digital report provides a record that university leadership can reference when making future investments in the school’s alumni relations and development efforts.”

“A sense of fit is important,” says Lindsay of GW’s decision to work with eCity on the microsite. “There’s just some ease in communicating and working with agencies that know higher ed. We felt comfortable working with eCity because of the strong roster of higher ed clients they had worked with in the past.”

To learn more about George Washington University’s target audience, eCity conducted user interviews with alumni who have given in the past, as well as stakeholder interviews with the GW development officers. Based on these interviews, we learned more about donor motivations and how they preferred to be thanked for their philanthropy, as well as identified ways to display stories and data. We then developed the concept for a site that would draw people in with relevant content, make all donors feel recognized regardless of gift size, and encourage users to ‘Continue the Journey’ with continued engagement and future donations.

Data visualization played an important role in this project, helping to convey the collective impact of philanthropy on the university. To get a better understanding of how the money is being used to fund specific projects, users can filter stories by three categories, which also served as pillars of GW’s campaign: Break New Ground, Enhance Academics, and Support Students. Within each of these categories, donors are able to see how their gifts are shaping the future of GW – by providing support for groundbreaking research, funding new scholarships for students, helping to attract and retain top faculty, and so much more.

The George Washington University ‘Making History’ microsite gives a voice to the students, faculty members, and program directors that were helped as a result of this historic campaign. The site is fully responsive on all devices and features a wide variety of written stories and videos detailing gifts’ impact. Users are also encouraged to share their own giving story on social media. Along with demonstrating the impact of these gifts through storytelling and custom data visualizations, the site also includes subtle asks for ongoing support.

“Our expectations were consistently met or exceeded throughout the project. Especially in the design and development stages, eCity was able to take our vision to the next level by adding key features and functionality that enhanced the user experience,” says Lindsay. Both internally and externally, the site has been getting kudos from GW leadership, alumni, and donors.

“We have received very positive feedback on the site. Knowing that we’ve met, and in many cases exceeded expectations is important,” says Lindsay. “The Making History site can be a point of reference for the staff the next time GW starts a campaign. Also, as we go out and talk to donors, it’s helpful to show the potential for gifts to change lives and transform the university.” 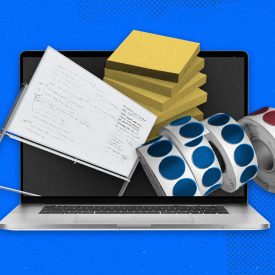 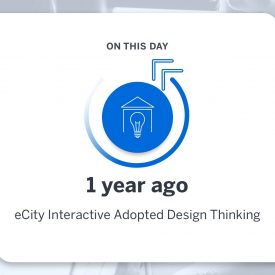 Our First Year of Design Thinking

Design Sprints and Design Thinking: Here’s How to Decide